9/1/ – As the weather has been so warm for the time of year we spent time clearing the river from Parnell Road to the Con C club, lots of watercress removed. Stewart/Frank/Trevor/Paul/Simon.

18/1 – Well the warm weather didn’t last and over night Clevedon had it’s fair share of snow. The following pictures, taken by Jamie, are of the river near Marshall’s Field.

20/3 – Due to adverse weather, since our last outing, this was the first opportunity to work on the river since the start of the year. We were able to clear the accumulated rubbish from the area around the footbridge from Strode road to South Clevedon playing field.

Using the boat Stewart/Simon were also able to clear the buddleia that had started to encroach, nearer to the Strode road bridge. Full trailer load of rubbish taken to the amenity centre. 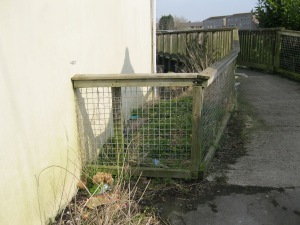 9/10 April – Clear mud/silt from the Land Yeo/Yearling Ditch junction and remove rubble from the rear of Lesley Darks before the river is set to the summer level. Stewart

Following my email to the group

‘Hi everyone,
While working on the flat roof of the Curzon Cinema (don’t ask) this morning I spotted that there was a lot of mud being disturbed in the river. On closer inspection there were two Ducks enjoying feeding now that the level has been increased and with them were six little ducklings. It was a shame that I didn’t have my camera with me at the time as I would have been able to share this with you all.
It’s nice to see this new life after such a long hard winter.’

I had the following replies:-

‘Ducks have brought their family of 12 (!!) ducklings round to us several times. The other day they spent the afternoon here and were wonderful to watch.  Happily, I was not on a roof and was able to take some photos, two of which I have attached.  They may be the same pair you saw as they  have not been here for a few days so we have no idea how many ducklings are left, although the parents seemed to be looking after them quite well.  Hopefully some of the surviving ones will be female as the one we see is in dire need of company ! At present she’s pestered on a regular basis by 5 males . . usually at the same time !  Hope you like the photos.’
Chris. (Incles) 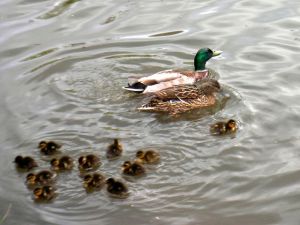 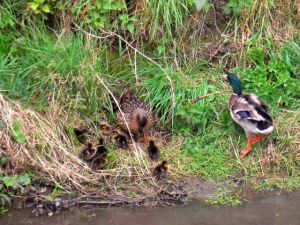 New life on the river May 1

Cutting the top of the river bank

Cutting the sides of the bank 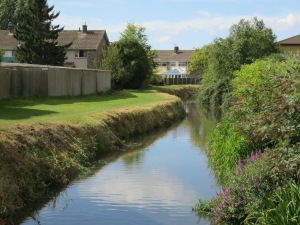 17/10 – Stewart/Paul/Trevor/Simon trees removed from the river bank just along from the Scout Hall.